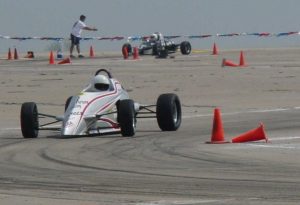 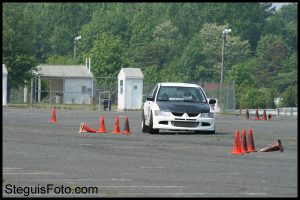 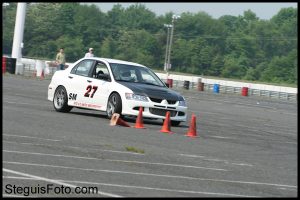 2004 Toledo National Tour. Mark trying to get this Neon to work for him, This was Grassroots Motorsports Project car.

————–
What year did you first get interested in (or start) autocrossing? 1986
What kind of car/class will you be competing with in 2005, and what are its particular strong suits in your opinion?      I am not completely sure yet.  It will either be a Dodge Viper GTS, a EVO VIII, or back to the CM Formula ford I drove last year.  Strong suits are somewhat self evident. :>)
How much of the sport do you think is attributed to driver skill vs. car setup?      I would say it is 80% driver, and 20% setup.
What is it about autocrossing that keeps you interested?      I think the challange of a new course every time, coupled with the reality that a perfect lap is virtually impossible is the most attractive part.  The cost effectiveness doesn’t hurt either.
Do you constantly critique yourself during your runs or after the event?      I critique myself most of the time.  During my runs, I don’t actually critique as much as take it all in, and then replay it after I am done with the run.
Do you see yourself looking ahead enough during a run; do you talk out loud in your car during the run?      I still occasionally find myself not looking far enough ahead, and know this when things start to feel fast.  No, I don’t talk to myself out loud in my car, I reserve that for work.
How do you feel after a fast, clean run?      If I know that I got most everything out of the car, it is quite a rush.
Why did you discontinue your short visit to wheel to wheel racing?      MONEY!  Road racing is very expensive and car prep intensive.  If the right series comes along, I would go back and do some more.
What techniques do you use to memorize the course?      Repetive walking,  mental imaging, and watching other cars run the course.
Have you ever tried to get a company to sponsor you? Were you successful?    The only official  sponsorship that I have had has been from B.F. Goodrich, although I have received some help from several other companies.
How many National Championships do you have and in what cars? Which of those cars did you own?         8 total as follows.

2007 SM          2004 Mits Evo            (mine)
What is your primary goal for the 2004 – 2005 season?   Since I haven’t completely decided what I am doing yet, I have yet to set specific goals.  Two long term goals would be to win A modified, and to win a national championship in an all wheel drive car, Accomplished, now just need an AM win
If you could have ANY autocross ride imaginable, what would it be and
why?      At some point I would like to run a competitive A mod car.  Aero downforce cars are an unknown to me, and I would like to try one.

What was your favorite subject in school ? Did you ever get below a B? C?    Math and Science would be my favorites, and I have actually received as low as a D.

Did you get any tickets as a teenager when you first had your driving license?     No, not that I didn’t deserve more than a few.  I have only had one ticket my whole life.

tv show- most stuff on Speed.  (except the infomercials)

movie- sorry don’t have one.

music/band- Most types, depends on the time. (exception – no rap, or Streisand)

sport– racing, but other than racing, basketball.

Regarding superstitions and good luck precautions, do you have any before a race weekend? Possibly mozzarella sticks at Pizza Hut on Friday nights as rumor goes???      I have gotten into the habbit of carb loading the night before a race.  I don’t eat much on race day, so it helps to load up the night before.

Besides racing, what do you do when you have time alone or with your kids?    Go to my kids various sporting activities,  boys club at church, video games, and play Guitar and Bass.

Have you or your kids had the worst BMX bike wreck to date?      Mine was by far the worst, I couldn’t turn my head fully for several months after having what they call “a major yard sale”.

How much do you play video games and what are some of your favorites?      I play xbox with my kids for fun, but also use PC simulations as a form of practice.  The PC games I like most are Nascar 2003 season by Sierra, and GPL.

Would you ever enter the talent show at nationals and what would you do?     I might play Bass in a band if there were others wanting to do that.

Beginning Wednesday, December 22, at 3:00 p.m. Central Time, the 2022 ProSolo SuperPass will go on sale. Only 185 of these limited-edition passes a...
View on Facebook
· Share

This will be interesting. ... See MoreSee Less