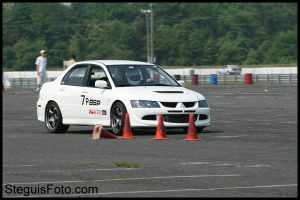 Family: Diane, the most kickass wife who still lets me get tons
of seat time even though we have kids! Gabe is now 2 yrs old
and Boy #2 is due Nov 24th (2007 that is). So by the time
anyone reads this we’ll hopefully be home with our happy and
healthy boy!

What year did you first get interested in (or start) autocrossing?
I think my first event was back in 1998 or 1999 in my 94 Civic
Si with FCSCC at Waterbury .

What kind of car do you compete with, what class do you compete in?
For the last couple years I have been in a 2003 EVO in ESP/BSP.
As of 2006 it was actually prepped for BSP with the new boost
allowances.

Where do you see yourself in 5 years from now in the sport?
I really want to get out to Topeka and give that a go a couple
of times. I had some very good drivers urging me to go this
year but I have some family/job priorities so that didn’t
happen. Progression in driver and setup skills are on my list
every year though.

In the past year or so, what have you learned to help improve
yourself as a driver and your car setup?
Back in 2006 when I built the evo I thought I was going to
automatically win in BSP. Then I got beat at both the Devens
Tour (by a BMW, Hi Steve!) and at the DC Pro (by a BMW, Hi
Lee!). That kinda pissed me off and it’s also when I realized
that it really is about the driver and started to push myself
alot more. Things that I had been told at prior Evo schools
actually started to make sense too. As for car setup I read
alot and started doing home alignments. This allowed me more
flexibility in setup and more frequent changes with less $$ spent.

What can you tell a Novice who is just starting out?
Get lots of seat time and listen to your instructors. I would
also try and find a local benchmark. This should be someone who
is fast (for their car/class) and consistent. Leave your car
stock too, there’s no reason to modify a car when you can’t get
close to its potential.

How much of the sport do you think is attributed to driver skill
vs. car setup?
This is a tough question. If you take 2 National Champions with
similar driving skill and one has lousy car setup then it’s
really important. At the local level driver skill is more
important when you consider the pool of prepped cars is much smaller.

What is it about autocrossing that keeps you interested?
The longer I find myself in the sport the more friends I have
made. Hell holunfie started like 6 yrs ago as a joke between
Kevin, Dan and I. Friendships are a huge part of it. The other
big part is that autox is competition at 10/10ths. I absolutely
love the competitive aspect of autox and it’s definitely an
outlet for me.

I drove Kevin Lau’s old evo 8 back in ’04 and absolutely loved it.  At the time I had a RWD car which doesn’t suit me as well and hopping in his car was a dream.  2 months later I had one in the driveway.  It had nothing to do with classing or anything.

I don’t really have one influence, but the biggest would probably be Kevin Lau.  We have spent many weekends battling back and forth over the years.  We both really hate losing and I don’t think either of us would be as fast if it weren’t for each other.  As for people I look up to I would have to say the local fast guys and instructors who were around when I started, Pat Salerno and Mike Johnson.  I’ve had them both as instructors and they have just continued to push every year.
Do you left-foot brake? In your opinion how has this helped you?
I’m trying to work on this.  I have a really hard time getting my left foot over to the brake in the evo.  I also trail brake alot so corner entry is really tough with the left foot since there is no sensitivity.  So far I just do it in my daily commute in the automatic and then hone my skills on the go-kart track to try and catch the skinny kids.

Do you critique yourself during your runs, after each run, or
after the event?
My critique during runs typically consists of lots of f-bombs
and mothertruckers if you know what I mean. Otherwise I will
critique a run and find one or two problem areas to focus on in
the next run.

How do you feel after a fast, clean run?
Shakey hands!

What techniques do you use to memorize the course?
Visualization big time. I will drive the course in my head
being sure I focus on looking ahead to key points in the
visualization. If I have any gaps I walk again and make sure
the visualization of the course is complete. I don’t include
acceleration points or braking points as they should be natural,
mainly how I think the car will feel and where it should be.
I’ll walk courses at NT’s and Pro’s like 3-5 times just to get a
complete visualization.

Would you consider expanding your skills to wheel to wheel
racing or even doing a HPDE?
I have thought about this. Right now I have a young family so
the cost friendly and lower risk autox suits me much better.
Nobody knows what the future holds though.

What is your primary goal for the upcoming season?
Car and driver development with Dan Cheung. We’ll be doing some
datalogging and more setup on my BSP evo with hopes of doing
well in Topeka . Should be interesting what 2 people come up
with since you have double the runs to make changes and collect data.

If you could have ANY autocross ride imaginable, what would it
be and why?
Probably the Porsche GT3 like Ian Stewart won SS in 2007 with.
It would be a huge layout change for me as well as about the
only stock class car I could probably leave stock. Plus it’s f-
in fast. It’s hard to replace an evo!

What was your favorite subject in school?
Probably Heat Transfer, it was the only class where I scored a
100% on a test.

Did you get any tickets as a teenager when you first had your
driving license?
Umm…yeah. Usually followed by a trip to the body shop where the
guy would say “you gotta bring these in so I can fix them!”

TV Show– Scrubs or How It’s Made

Music/band– Rage Against the Machine

Other hobbies besides AutoX?
Giving the wife back rubs!