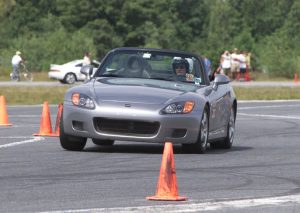 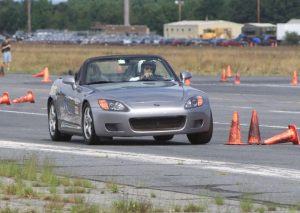 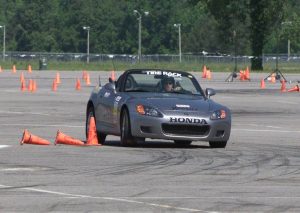 I picked Brian who is my co-driver and owner of the S2000 I currently drive, as his improvement over the last few years has gained him a few National event Trophies and someone to watch in the future. He is a great co-driver to work with, being the engineer that he is, he is always analyzing everything, and that helps us both..

I met Brian at a Porsche Club event as I was doing my usual walking around with my helmet looking for a ride. I walked up to him and just asked him if I could co-drive with you and I told him I would be easy on the car, he said “sure, no problem, it’s just a car” So from that day on,  LJB Racing was formed……….

What year did you first get interested in (or start) autocrossing?
My first experience was in college with an 86 RX7.  I went to one event in college and won a novice trophy my first time out.   I only went the one time but always wanted to go back.  Then in 2001 I bought an S2000 and after owning it for a couple of weeks I knew I needed an outlet to have fun in this car.  The street was just too dangerous.  So I searched out the SCCA and started autocrossing.

What kind of car do you compete with, what class do you compete in, and what are its particular strong suits in your opinion?
I compete in a Honda S2000 that has moved from AS to BS.   I have limited experience with other cars but the characteristics that impress me the most are the S2000’s initial turn in, ability to rotate, and braking.  All three of these strong suits can hurt you in competition before they can help you.  Once sorted out and under control the S2000 is an incredible car to drive.

How much of the sport do you think is attributed to driver skill vs. car setup?
This is a topic of much debate and really depends on a specific situation (stock categories vs.. prepared)  If a car is poorly setup and the driver has to continually fight the car he cannot win.  But, a well setup car cannot win without superior driving skills. I will say that the sport is heavily reliant on driver skills and without them you will not win, even in the best car.

What is it about autocrossing that keeps you interested?
There are three things that keep me coming back.  First it’s the people.  The friendships and fun at an event are really something special in this sport.  Most sports become so competitive that the fun is driven out, it’s different with autocross.  Secondly, is the extremely high level of competition at the National level that never seems to reach the cutthroat level.  Lastly its the adrenalin rush. Coming back from a 45 second run and your hands are trembling from the pucker factor is just plain addictive.

Do you constantly critique yourself during your runs or after the event?
Every time!  I’m always looking at three things.

1. Was I as fast as I could be in the fast parts

2. Was I as slow as I should of been in the slow parts

3. Did I take shortest route through the course.

How do you feel after a fast, clean run ?
That the best 5 minutes in the world, then Perry buries it by .5 second and it’s all over.  I’m working on that.  Can you hear my footsteps??

Would you consider expanding your skills to wheel to wheel racing?
Its sounds like fun and I might take a stab at Spec Miata but for now I’m focused on Autocross.

Have you ever tried to get a company to sponsor you? Were you successful?
I don’t think autocross offers great exposure for a corporation that doesn’t sell something directly to autocrossers, so I’ve never tried.

In a way winning tires and money at ProSolo’s and Tours is a sponsorship.  So, LJB Racing has Hoosier, Honda and Hawk as sponsors.

Is it only the driving aspect that entices you to go autocrossing?
Absolutely not,  if that was it I think wheel to wheel racing would be much more appealing.  Think about it, 6 minutes of racing over a weekend and spending thousands of dollars a year.  Its more than driving.

What trophies or titles have you won?
Well, its tough to win when you drag one of the best drivers in the country with you to every event.  But before I teamed up with Perry I won the PA State Championship in AS in 2001 and finished 1st in Philly Region AS in 2001.  Those wins were more a factor of the lack of competition than driving skill.

My best trophy to date was 03′ DC tour.  4rth behind Mike Soloman, Pat Salerno and Perry.

My best run was the ’02 National Championship North Course.  Finished 9th that day in front of some very talented drivers.  Sad thing was I gave it all back on the South Course.

What is your primary goal for the 2004 season?
Two goals this year.

If you could have ANY autocross ride imaginable, what would it be and why?
Lotus Elise

There are three aspects to autocross when it comes to cars.

When I evaluate what I want in a car I would rate Handling first , braking second and acceleration third.  I think the Lotus Elise will be best performing stock vehicle in handling and braking.  The acceleration will be exceptional but other cars will easily out accelerate an Elise (Anything with 400 hp and big tires will win that race hands down)

If the SAC and the SEB class the Lotus in SuperStock I think next year will be very exciting.  The Z06, C6 and Elise will make for great competition as they all take a very different approach to making a sports car.