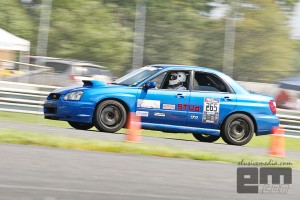 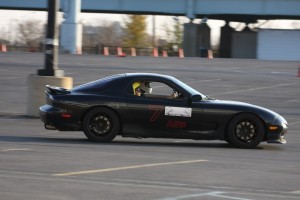 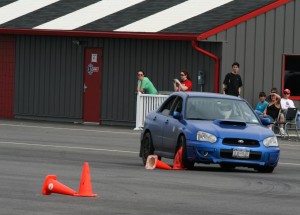 Daily Driver: Reeboks, Subways & Buses. I’m in the city. There is no joy to driving around my neck of the woods, but when I do drive, I make sure to keep my palm on the horn and par-up with the nearest yellow cab.

Family: (MUCH HAS CHANGED HERE, Married with 2nd child due March 2016)My family includes my dad, mom, and brother. They are intelligent, strong, and unique each in their own way. I am grateful for their support and encouragement. I will never forget when they finally came to their first race. I was stuck in a rut with a bunch of coned runs on the road course at Englishtown.  Pro-Class was 18 drivers deep and I needed a significant improvement to take the win. They showed up just in time to watch my last run of the day. I remember thinking I would probably blow this run with 10 cone penalties because they were watching. I’ve never been too smooth under pressure. Much to my surprise, I was clean… and friggen’ fast. The time was good for 1st Place in Pro Class and 1st Place Overall Pax. Thanks Mom & Dad.

I also have my Hamfist Racing family. It’s more like a support group for automotively-disturbed individuals (the ones you find at our local autocrosses). Check out www.HamfistRacing.com for our anonymous support group meeting schedule.

SCCA Region: I’ve bounced around between Florida Region, New York Region, and Northern New Jersey Region but now I’m sticking with NNJR. They run fantastic events and host the most events in the tri-state NYC area, but I am a NYR member on paper..

How’d you get started in Autox? While attending college in Miami, I finally bought my first “sports car”. It was a fifth generation Honda Prelude. My classmate Joe insisted that we go to the local drag strip, at the time called Moroso Motorsports Park. It was time to settle the on-going debate of “whose car is faster?” He had been to the track several times with his Acura Integra GSR having grown up in south Florida. Looking back on the race, I don’t recall who won. What I do remember is one candid individual who approached me in grid and insisted my nearly-stock Honda wasn’t much of a strip car and that I give autocross a try. He was right. The next month I found myself driving crusty-eyed on a Sunday morning to a not-so-nice neighborhood of Miami for my first autocross. Knowing nothing about SCCA classing, I showed up with the interior partially stripped. I was bumped to E-Prepared and completely dominated my class, despite a glorious spin, placing both first place and last place simultaneously. I kept coming back.

What you wished someone had told you when you started? This could get expensive.

What did you drive at your first AutoX season? My first event described above was the last of the ’04 season. The following year I continued to campaign my ’99 Prelude regularly. Eventually I discovered STS (now called ST) made a nice playing ground considering the cars level of “prep”.

What kind of car & class do you currently compete in? Well, there is the 2004 Subaru Impreza WRX STi and the 1993 Mazda RX7 “R1-spec”. The Subaru is the tried and true track beater. She can take just about anything I throw at her. Currently the car runs SCCA Street Touring Ultra (STU) class. I also campaign this car in time attack racing with Redline Time Attack in Street-AWD class. The Mazda is a bit fuzzier. Due to the temperamental nature of a boosted rotary engine, the car would be much healthier in Super Street Modified (SSM) trim. Fortunately, third generation RX7’s historically dominate this class. Unfortunately, moving from its current class, A-Street Prepared, to SSM is getting ridiculously expensive (sponsors feel free to help). I really hope to campaign this car nationally next year but there are many obstacles to overcome first.

What made you choose your current autox car? There are a lot of people who trash talk Evo’s and STi’s saying their sophisticated computers and drivetrains are idiot proof and that any fool can drive one fast. I recognize there is some truth to that statement. What better car to prove myself in than a third generation Mazda RX7. It’s well balanced, light, powerful, and unique but it will punish you if you overdrive it. Nobody can deny that it’s a sports car requiring absolute car control skills. Oh yeah, I’ve dreamed about this car since I was 15 years old.

Who is your biggest influence in the sport? Why? Mark Daddio. He took the skills he learned in autocross and began dominating in time trial / time attack competition driving the shop car of one of the country’s most respected tuning shops. He also has an energy drink sponsor. Energy drinks are large expenses that most people neglect to include in their annual racing budgets. Seriously. How else are we expected to function on such little sleep

Have you taken any AutoX/Driving Schools? No.  (Has done an Evo Challange School)

Funniest autox story, if any? Packing up after an autocross, I tossed a bottle of oil in the RX7 and it crushed the hammer of my fire extinguisher. The extinguisher went off and started billowing smoke out of the hatchback and both doors. What a mess. I didn’t find it very funny, but the entire field on autocrossers in paddock sure did.

Where do you see yourself in 5 years from now in the sport? Driving What? I’m working towards a Solo National Championship & a ProSolo Championship. Call it a dream, but I know I can do it. I don’t see myself making any big moves to new cars. Just imagine the perfect RX7.

In the past year or so, what have you learned to help improve yourself as a driver and your car setup? For car setup, you MUST be on the right tires for the class. That means get the biggest stickiest tires allowed on the widest possible wheel that fits. What I learned this year that enable a certain level of racing success is that you have to be willing to make sacrifices if you want to win. This statement goes beyond car setup costs. To win you need to drive… a lot. To drive a lot you need to do a lot less of everything else. Unfortunately, sometimes this means less time for family and friends. Fortunately, autocross is full of friendly people. Make sure you befriend your fellow racers.

Do you left-foot brake? In your opinion how has this helped you?  This skill is something I never really applied to racing (the one place it matters most). I only left foot brake to warm up my brake pads on my way up to the start line.

What can you tell a Novice who is just starting out?  There is a lot of good information out there on how to advance your autocross skills. I’m not going to pretend I have novel ideas. The most important factor is to simply stick with it and make sure you keep coming back to races. The more your come the faster you will get. Seat time is number one. Secondly, make sure you’re enjoying yourself and embrace the people around you at the track.

Worst advice you ever received?
“Use the throttle to rotate the car.” This statement is just wrong and doesn’t work on most cars.
Best advice?

Look ahead!!!!!!!! I say it to myself almost every time I am at the start line.
How much of the sport do you think is attributed to driver skill vs. car setup?

The competition. STU always has huge turnouts with great drivers, even locally. The battles for final positions were always fierce. In 2010, I fear I will not have enough local SSM competition to keep the events interesting. Raw time battles are fun too but I’ll be bringing a grenade to a gun fight. Catch me if you can.
How do you critique yourself after a run?

To remember what I did wrong I just think back to where I wasn’t looking ahead.
What techniques do you use to memorize the course?
It’s best not to memorize. If you memorize you start to slack on looking ahead.

Would you consider expanding your skills to wheel to wheel racing or even doing a HPDE?
I currently run HPDE and Time Trial racing. I hope to continue with this transition and attend more time trial races in years to come.

To date, my most notable trophy was First Place at the 2009 ProSolo Finale in Lincoln Nebraska. In the same week, I took Third Place out of 46 drivers in STU at the 2009 Solo National Championships (coned away a run that would have otherwise won the Championship).

A National Championship.  (This finally happened in 2015. )
If you could have ANY autocross ride imaginable, what would it be and why?

I would like to drive the Strelnieks’ SSM 3-Rotor Mazda RX7 as a benchmark.

Physics. I only ditched class once…

Your Honor, I invoke my right under the Fifth Amendment to avoid self incrimination.