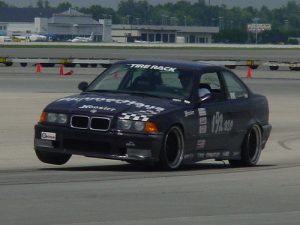 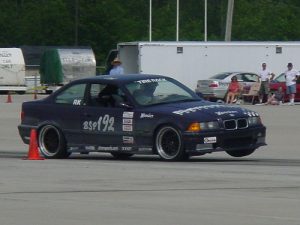 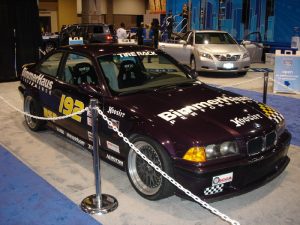 Where do you see yourself in 5 years from now in the sport?
Doing what I do now; instructing, course design and
evaluation, hopefully a National Championship.  I
really enjoy the level at which currently involved.

In the past year or so, what have you learned to help improve yourself as a driver and your car setup?
Be patient and relax before you run.  If you’re super
nervous and/or stressed out you’re bound to have a bad
run.

What can you tell a Novice who is just starting out?
Two essential points: First, get as much seat time as
possible.  The more drive, the better you get.
Second, ask questions!  This is a friendly sport, and
there is always someone faster who is willing to help
you out.

How much of the sport do you think is attributed to driver skill vs. car setup?
It’s hard to put numbers on it, but the skill required
is significantly higher than the car setup.

What is it about autocrossing that keeps you interested?
Friends, and the will to win the “big one” (eventually)!

Do you critique yourself during your runs, after each run, or after the event?
Absolutely!  I’m my worst critic!  After each event
there’s no doubt I know wether I drove well, or not…

How many Courses have you done for the Solo II Nationals, and will you be doing any at the new site?
I was the 2004 Solo Nationals South course designer.
It was a lot of fun.  I’m considering doing a course
in ’08 (teamed w/ Andy Hollis) but that is still a WIP…
I’ve also done course designs for 9 ProSolos, 2
National Tours, and 3 NeDivisionals, and may local
events.  I’m also on the SCCA Course Evaluation
Committee.

What is your favorite site to setup a course?
Without a doubt, ‘A’ Lot at Fedex Field in DC!

Do you have a favorite course in the past you enjoyed the most?
The ’07 DC Pro Solo and the ’04 DC National Tour both
rocked!  Another favorite was the ’00 Harrisburg
ProSolo.

How do you feel after a fast, clean run?
Relieved and satisfied.  My comment to myself usually
is ,”It’s about time!”

What techniques do you use to memorize the course?
I have a very photographic memory(helps w/ course
designing).  I can walk a course once and know where
it goes w/o issue.  My walks after that point are to
pick my desired line.

Would you consider expanding your skills to wheel to wheel racing or even doing a HPDE?
The thought pops into my head occasionally…but as of
now I have no desire to do it.

What is your primary goal for the upcoming season?
To get the competitive parity restored in BSP!

If you could have ANY autocross ride imaginable, what would it be and why?
I’d much rather be 6″ shorter so I could hop in any
car and drive!  If I had to choose one car, a 996 GT3
in SS looks like fun.

What was your favorite subject in school?
Girls! (did pretty well in History class, too)

Did you get any tickets as a teenager when you first had your driving license?
Hell yes!  Almost lost my license twice from too many points.

Other hobbies besides AutoX
Dirt bike trail riding on my ’08 KLX450R.

Some of your favorite Web Sites?
CNN.com
THUMPERTALK.com
and anything Autoxcross!