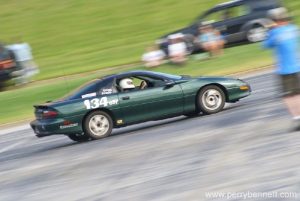 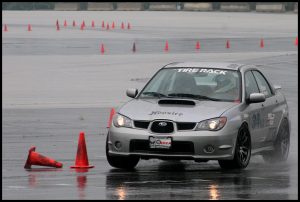 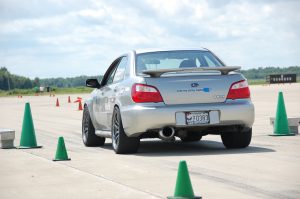 Daily Driver: whatever’s at the end of the driveway. Right now, it cycles between the 1996 Camaro Z28 1LE and the 2006 Impreza WRX

SCCA Region: Blue Ridge and Atlanta
How did you get started in Autoxing? Ex-boyfriend was enticed to come out by a fellow RC car enthusiast when he bought his Mustang.

What you wished someone had told you when you started? It’s like crack – addicting and can cost a LOT of money

What did you drive at your first AutoX season? 1992 Mustang LX 5.0 notchback

What kind of car & class do you currently compete in? ESP(L) in a 2006 Subaru Impreza WRX

At National events do you run Ladies Class or Open? Why? Depends. The last two years, at ProSolos and at the Championships, I’ve run ladies (L1 then L2 at the Pros and DSL then ESPL at the Championships). The primary reason is because of the exposure for my primary sponsor, IAG Performance. They approached me about sponsorship after I won DSL in 2007, so I’ve felt obligated to provide them with as much exposure as possible.

At National Tours and Divisionals, I do run open class. Depending on if some of the ProSolo indexes are out of whack again in 2010, I may just run open there too.

What made you choose your current autox car? At the time, Subaru was offering some pretty enticing contingencies. That stopped in 2009, but my sponsor is primarily a Subaru shop, so when offered the chance to take the car to ESP, I did. Otherwise, in 2009, I would have taken the old green Z28 1LE to ESP.

How you are able to drive so many different cars (like the time some guy you had never met before offered you his C5 … or the time you got to drive a Ford GT)? What was your favorite? Honestly, I don’t know how I get to drive so many different cars. For some of the rides, especially at the local level, I think it’s because the owner is relatively new or doesn’t usually do very well against their competition, and they want to see what the car is capable of. Now, the Ford GT, to be fair, I only got to drive it on the street, but I’d been talking to the guy about Summit Point Raceway (he was putting miles on it to break it in for a Porsche club event there the following weekend) so I guess he figured I wouldn’t hurt it.

As for my favorite… no one believes me, but the car I _always_ want to drive is my green Z28 1LE. It broke my heart to walk away from that car and FS when it was no longer competitive there. As for “other people’s cars,” Scott and Greg Witt’s prepared-class TVR Vixen was incredible. Joel Fehrman’s beastly street-prepared Subaru Impreza WRX STi is one of the few cars to ever scare me. And I always had a great time driving Billy Brooks’ 2000 Subaru Impreza 2.5RS in street touring.

Who is your biggest influence in the sport? Why? Probably Chris Lindberg. It’s almost cliché now, but he taught me that sometimes you just have to put all the BS aside and drive. He knew how to have fun and still take competition seriously.

Who has all worn The Bud Dress’s? Oh jeez. I think the first one was actually John Thomas, though everyone remembers Chris Lindberg doing it. Mark Shehan wore it at a CENDiv when he was practically DFL after the first day. Tom Hoppe wore it “for good luck” at a Subaru Challenge event in Atlanta. Steven Rankins did it out of the blue at Nationals one year when I tossed it to him (it had been in my helmet bag) as a joke. Heather Mann wore it at a DC ProSolo too. I have a blue one as well, and Diane Lapusnak-Johnson wore that when she drove my black Camaro and I wore the white one while driving with Ron Bistrais (both of us were running FS-open). And Aaron Buckley wore a Bud “crop-top” shirt when he was losing to me at an Oscoda ProSolo (I was in Billy’s Impreza, and he was driving his Celica GT). Now, did you really want all those visuals?

Funniest autox story? I’m not sure the funniest story would be appropriate (or even legal!) 😉

Scariest moment? Likely when Kent Rafferty and I took Tim Aro to the hospital for what turned out to be a kidney stone. We had no idea what was wrong with him, and he was in so much pain he couldn’t really say what was wrong. Other than that, hearing a tremendous “bang” in Justin Rest’s WRX when I shifted into second gear at the 2007 DC ProSolo on Saturday afternoon was scary enough from a financial perspective that I almost threw up in the car. It turned out to be a front endlink, but the timing was such that my brain could only think “second gear.”

Where do you see yourself in 5 years from now in the sport? Driving What? I’m not sure. I’ve gotten somewhat disillusioned of late with some of the classing, as well as some less-than-pleasant experiences with competitors. I am very competitive, but I also won’t drive something that I don’t think is fun (which is why I avoid most FWD ride offers, because most of my FWD experiences have been less than awe-inspiring). If I don’t have a ride that I think is competitive Nationally and is fun for me to drive, I will likely take a break.

In the past year or so, what have you learned to help improve yourself as a driver and your car setup? Actually, in the past year or so, I think I’ve stalled out on improvement, to the point where I want to take another Evo school, or at least get someone to work with me. The complete transformation of my WRX from DS to ESP has been a difficult transition from a driving standpoint – I have been driving the car too much like it’s still a DS car and not trusting that it will drive like I want it to. My codriver, on the other hand, has had the car “come to him,” so to speak; he constantly overdrove it as a stock-class car because he was used to his own *SP car.

Do you left-foot brake? In your opinion how has this helped you? I don’t LFB, though I think I should eventually try to learn how to do so, especially in a turbo car.

What can you tell a Novice/Female who is just starting out? Talk to people. Ask lots of questions. Autocrossers may come across as clique-ish, and some of them are, but the vast majority are very welcoming to newcomers and want to help out.

Worst advice you ever received? Nothing’s coming to mind, so I guess I haven’t received anything too awful.

Best advice? Lots, from many different people. Most of it revolves around not trying to go it alone – ask for help, whether it’s to get an idea about the best line in a turn, or to get a car set up.
How much of the sport do you think is attributed to driver skill vs. car setup? I think most of the top spots at the National Championships are primarily driver skill, especially in stock classes. In classes that allow more setup changes though, I think there is more and more of a car setup factor involved. A great driver may be able to overcome *some* deficits in setup, but at the National Championships, most of those cars have had extensive testing of the setups and should be at the top of the game, bringing the championship back to the driving skill, not so much the car setup.
What is it about autocrossing that keeps you interested? Mostly the camaraderie and the challenge. It’s not easy to try to get a course right in a handful of attempts. Look at things like the Rev It Up competition, and how the “general population” or even the “dedicated road racers” did versus how the “regular autocrossers” finished. Even people who weren’t National level autocrossers, but autocrossed locally, tended to be able to read those courses and get the most out of the two runs, more so than 99% of the participants. That’s pretty challenging.
What techniques do you use to memorize the course? I have a photographic memory and a crazy ability to visualize things in three dimensions. I can walk a course, then watch someone driving the course and visualize what they are seeing as they drive it, even as I’m standing on the sidelines.

If you had to choose between Pat or the green Camaro…? Is this like one of those Miller Lite commercials?

What is your goal for the upcoming 2010 season? To not drive my WRX like it’s still a DS car

If you could have ANY autocross ride imaginable, what would it be and why? My green Camaro in full ESP trim because I love the car, and it’s not competitive in any other class right now.

What was your favorite subject in school? biology

Did you get any tickets as a teenager? Just one, for 16mph over.

How did you do in your first attempt to get your driver’s license? Passed easily

Thank you Mr Conners, and the rest of the scca for making this happen. ... See MoreSee Less

Heads Up! ProSolo Season to Resume

Help a fellow racer who recently had an accident at NJMP. www.gofundme.com/f/donations-for-mark-petronis?utm_campaign=p_cp_display&utm_medium=copy_link&utm... ... See MoreSee Less

On May 23rd Mark was involved in an accident at NJMP lightning. He suffered burn injuri... James Candelaria needs your support for Donations for Mark Petronis
View on Facebook
· Share

Getting Women on Track Across SCCA Programs

SCCA Women on Track has been providing opportunities for women to get involved in SCCA programs since its announcement at the 2018 National Convent...
View on Facebook
· Share

Grant Reeve is thinking, I want to drive that. ... See MoreSee Less

Want to get some practice on Lot E before the Champ Tour May 7-9th? Sign up for the NNJR-SCCA event this Sat as we will be on Lot E. www.motorsportreg.com/events/nnjr-autocross-event-4-lot-e-metlife-stadium-scca-northern-new-jerse... ... See MoreSee Less

Autocross/Solo w/ SCCA - Northern New Jersey Region - Solo on Saturday, May 1, 2021 at MetLife Stadium, East Rutherford, NJ - The Meadowlands has the right to cancel the event at any time so please ch...
View on Facebook
· Share