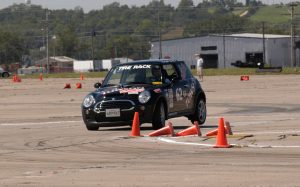 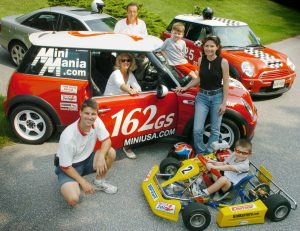 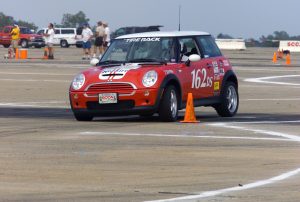 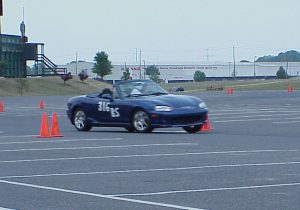 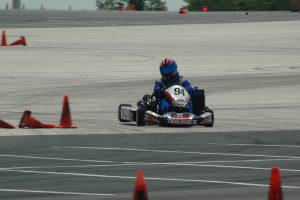 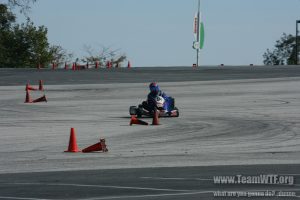 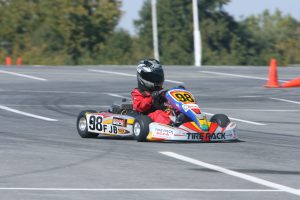 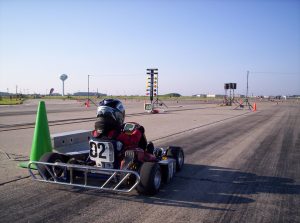 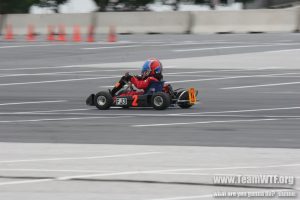 I started in 1999 after driving by an event at Ft. Meade.  I called my father and asked if that was what he used to do.  Being in the market for a new car, I based the decision on autocrossing after watching several events and talking to people.  Before my first autocross, I had already bought a helmet and an extra set of wheels with race tires (A008RSII’s).

What kind of car do you compete with, what class do you compete in?
I run a shifter kart in Formula 125.  It’s a CTS chassis with a Honda CR125 motor, about 40hp.  The best part?  The amazing Brembo brakes.

In the past year or so, what have you learned to help improve yourself as a driver and your car setup?
As I teach so many schools for the D.C. Region, I get tons of seat time, which always helps.  But, the kart setup is very critical and every time I drive, I learn something new.  So far through two seasons, my comfort level and kart knowledge improves greatly, so I see that as a constant.

Don’t be afraid to ask questions, the autocrossing community is incredibly friendly.  The driver is so important, and although you’ll want a competitive car eventually, learn in what you’ve got.  However, I would hope it’s not a high powered monster, simple small cars are great learning tools.  If you’ve never experienced anything like this, hit the indoor kart track first to learn about carrying momentum.

How much of the sport do you think is attributed to driver skill vs. car setup?
The driver is ALWAYS the most important, but it depends on the class and even the car as to where the pecentages fall.  For example, in *general*:
Stock: 95% driver, 5% setup
ST and SP: 80% driver

The simplicity in the sport and the ability to run as a family.  There’s an adreneline rush for sure, but that can be had in any high speed motorsport.  Autocrossing is safe and simple…and relatively inexpensive.  I really enjoy the focus on the driver, since there isn’t normally a section where all out power gets an advantage.

Do you critique yourself during your runs, after each run, or after the event?
I like discussing the course with fellow competitors between runs.  Some choose not to “reveal” anything, but I like to hear what everyone has to say and point out spots that I feel need the most attention.

I definitely get the “shakes” when I know it was fast, and it helps for the remainder of the runs for sure.  But, there’s no doubt this feeling is what keeps you coming back.

What techniques do you use to memorize the course?
Something I still don’t know how to teach as everyone does it differently, memorizing the course is tough.  The most obvious technique is looking ahead while driving.  But prior to running, during the course walks, I’m trying to remember element to the course which is why I appreciate a creative course designer.  If the course is the same “sweeper, transition, sweeper, transition” type of course, there are no elements that stand out.  But if you can name the turns or sections, it’s much easier to visualize in your head prior to running.

At this stage in my life, I’m going to continue to keep it simple.  I enjoy the kart track (outdoor), but can’t afford to get hurt, so I keep it to fun track sessions and autocrossing.  And as for a car on the track, the expense and further commitment outweigh the benefits.

What is your primary goal for the upcoming season?
My primary goal for 2008 is to have a much better motor on the kart.  I had compression problems prior to and at Nationals, of all places, and it ruined my shot for 2007 after the first day.  I learned a great deal about the karts this past season, including building the motors, I don’t plan on making that mistake in ’08.

Always a tough question.  I do love mid-engines and really enjoy driving a Boxster S.  But as a GT3 is a competitive car and one of my desires to own, I’d have to go with that.  Then again, after my experiences with speed in F125, Modified class cars are tempting…

Did you get any tickets as a teenager when you first had your driving license?
Ah, yeah.  My record got bad enough that I was on MAIF (Maryland Auto Insurance Fund) at one point.  This is what you do when no insurance company will cover you until you clean it up.  However, none of my tickets were ever reckless driving or something very serious, it was just the frequency 🙂

Movie:  Haven’t seen many in a long time

Music/band:  A little bit of everything, but Avril Lavigne and Nickelback are current

Other hobbies besides AutoX
I’ve been snowboarding since ’86 and playing hockey since ’75, but both have taken a backseat to racing so it’s very rare for both.  It’s good offseason stuff for sure.

Some of your favorite Web Sites?
www.ekartingnews.com pretty much a given for kart stuff
www.juliangarfield.com our future driving star, won’t be long before he beats me in my own ride.

Profession: Don’t have one

Family: Dad, Mom, Carson, and I

What year did you first get interested in (or start) autocrossing?  2003

I’ll still be in a kart in FJA, as well as Sprint racing in Rotax part of the time.

In the past year or so, what have you learned to help improve yourself as a driver and your kart setup?
I’ve learned to carry more momentum and be smoother on the wheel.  Giving feedback is important to making kart run right.  I’ve learned to check the pressures and listen for when the motor isn’t running great.

I would say that it is more driver than kart setup, but without a good kart setup, it’s harder to show your skill.

I like to be able to compare myself to the cars, which I can’t do on the track since I’m only racing with other karts.

I’m always thinking about how I can improve for either the next run, or the next event.

I feel great and I normally know that it’s fast as soon as I cross the finish line.  I always remember that there’s always more time out there to improve.

I currently am beginning my wheel-to-wheel season in Rotax to improve my skills in racecraft.

My goal would be to give better feedback on the kart and to run with Super Stock cars.

I would want to drive a Modified class car because I like the exotic looks and fast speeds.

My favorite subject is Math because I like to problem solve.

Movie:  Night at The Mueseum

Some of your favorite Web Sites?:   McLaren Fantasy League,  WDCR SCCA (for results),  and of course  www.juliangarfield.com