One of the things an autocrosser begins to learn at some point is that they need to look ahead while on course (see photo below of Shelly Monfort looking around the corner for the exit). When novices, many of them look no further than the hood of the vehicle. As their skill level increases, they may look one or two gates ahead. Should they receive instruction, either locally or via the Evolution Performance Driving School (EPDS), they will expand that to four gates or more. All this is done in the name of preventing surprises to the driver while on course. The premise is that the more you look ahead, the better prepared you are to be ready for those elements. To that end, I’ve become pretty adept at looking ahead. It’s something that was ingrained in me when I was still honing my skills, and it’s something I now help others do in my role as an Evo School instructor.

It’s been said for years, the learning experiences acquired in safe, controlled conditions (such as an autocross) make for an environment conducive to improving our everyday driving skills. 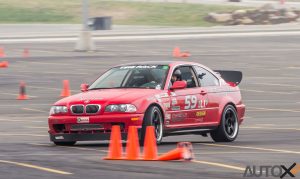 But there were these two times in particular when being an autocrosser saved my bacon.

The first time occurred when I was approaching the Woodbridge Mall via Rte. 9 once Routes 1 and 9 diverge in my old hometown. A major local road is fed onto Rte. 9 for an instant before its continuation as a left-hand exit about 250 ft. later just after an old overhead train trestle which had its center support on a tiny median bordered by armco. There was a car in front of me in the middle lane (of three). I was about 500 ft. behind. A car was flying down the feeder ramp and – by looking ahead – I saw that this individual had no idea the other person was in the center lane. The thinking ahead component of our skillset told me that they were going to come together, so I began to brake before they even collided.

Sure enough, they did a Days of Thunder impression on the highway. The person merging checked the other car into the armco which prompted an immediate spin. This, in turn, caused the hapless victim to collect the person who collided with the vehicle in the first place.

I saw it all unfold and was moving along slowly enough that not only was I not part of the fray, but I was able to drive around the whole thing.

The second time occurred, coincidentally, when I was on my way to teach a Phase One at MetLife Stadium. There was some road construction on a bridge support on the median which caused the Turnpike Authority to shift the lanes (rather immediately if you must know) in order to put up concrete barriers for the worker’s safety. I was in the left lane and there was a tractor trailer about 150 ft. ahead of me. As we were approaching the work zone, I was looking ahead and saw the paint on the road indicate the lanes shifting. But I also saw that the trucker was not shifting accordingly, so I began to brake lightly. Good thing I did because he never moved. Had I stayed on pace, I would have pulled alongside him just in time for him to pinch me between the concrete barriers and his trailer.

Indeed, autocrossing can be credited in both situations with keeping me safe from harm.

Unfortunately, the same skills didn’t help my mom a few weeks ago. She and my aunt were traveling on Rte. 72 through a wooded section cutting through a state forest. A car proceeded to pull out, and even though my mom said she saw her begin moving early enough to begin slowing down, she hit the person.

She and my aunt were bruised and quite sore, but okay overall.

Now that a few weeks have passed and based on how it was explained, it sounds like my mom actually tried to avoid her, much as how we’d approach a quick offset or slalom cone. Having absolutely ZERO interest in cars other than a transportation device, she didn’t possess the ability to maneuver the car assertively enough to potentially have avoided the impact altogether or, at the very least, have made it a much less traumatic event.

Admittedly, my mom is a very safe driver and her record proves such. However, I can’t help but wonder if she – and all of us for that matter – had learned to drive from the onset in a manner as taught to the citizens of Finland. Would we all be better drivers over the remainder of our time on the road? To go a step further, what if autocrossing a minimum of five times was a mandatory requirement? No pretenses about becoming competitive would be made, just learn to properly control that 3000 lb. missile you use each day.
One thing’s for certain, all three of our children will autocross. All three will attend an Evo School, even if they have no intention of getting into motorsports… One day I want them to tell me, or even their own children, about the time when being an autocrosser saved them. 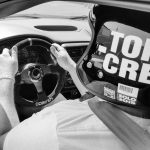