The day began innocently enough. I enjoyed my morning home with the family until my good friend and longtime racing buddy, Perry Aidelbaum, picked me up at noon to head to Norwalk, CT where we’d been invited to sample some racing simulators at a new facility called Crimson Simulation. These weren’t your ordinary simulators like you’d find in an arcade, these were indeed the real deal, the type that simultaneously builds better drivers & ruins any semblance of daily productivity in one simple step.

Upon arriving in Norwalk, we got lunch at a tavern around the block from our destination. We both ordered jalapeno nachos from the appetizer menu. Perry then ordered a chicken Caesar salad and I ordered a beef au jus sandwich; we both enjoyed what we ordered. Traditionally though, I don’t eat much before I compete, but I figured it wouldn’t be a big deal today, I mean, we were only going to be playing around on some simulators, right? What could go wrong?

Everything about the office building where Crimson Simulation is located is very nondescript, other than a small koi fish pond in the lobby. Nothing blatantly stands out to new arrivals that they are about to experience some of the most realistic driving simulators outside of those found at the McLaren Technology Center in Woking.

We entered the office suite where Crimson Simulation is located and almost immediately, gigantic smiles appeared on our faces. Owner and simulator guru Naid Naydenov was calmly       pounding around Lime Rock in one of his six positively badass simulators. Correction, he has five positively badass static simulators that can be rented for $34 an hour.  He has one absolutely, positively, batshit crazy, screw­my­retirement, motion simulator that serves as the pièce de résistance for his business that can be rented for $68 an hour.  Naid adds that should   someone realize they can’t live without one of these in their own homes, every unit at Crimson Simulation is for sale.

I knew we were in for a good time. Well, for one of us at least.

After a brief tour, Naid explained to us all of the technology that goes into creating a realistic simulator versus just playing with the toys we call steering wheels and pedals at home. Naid stresses that the forces the driver experiences in the brake, gas, and steering, are very realistic and direct; this not only adds to the realism, but it helps the driver create a muscle memory of what a certain car will feel like through a certain corner at a certain track. In the quest to make these simulators more about driver training and less about entertainment, this makes sense. He pointed out that his static simulators use a combination of off­the­shelf and custom­made componentry, establishing a price of $17K, as­configured, each. The motion simulator, however, is constructed entirely of custom componentry and technically can’t be replicated by anyone in the traditional sense of the term and carries an estimated $58K, as­configured, price tag as a result. 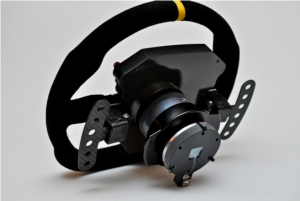 Make no mistake about any of his simulators though. Each one is gorgeous, with wonderful attention to detail, but the craftsmanship on the motion unit is nothing short of astonishing! The steering wheel backs are made of carbon fiber and feature metal paddles for the shifters that feel better and work more precisely than those in a Ferrari or Lamborghini. Did I mention Naid has a few different wheels available, so as to suit the type of car one is driving? The pedal assemblies, particularly the brake, is nothing short of miraculous. Driving a VW TDI Cup car? Almost OEM softness. Driving a NASCAR at Daytona? You better have enough strength in your leg to stand on that thing to slow you down in case 20 people wreck in front of you. The same goes for the steering effort, as it too is completely tunable. Did you know IndyCars don’t have power steering? My shoulders certainly didn’t!

Naturally, all this technological goodness would be wasted without the software necessary to truly immerse the player within the racecars and tracks of their dreams. To that end, all six simulators run the incomparable iRacing sim. With over 60,000 fans worldwide, this program complements the hardware beautifully, made all the better with CPU’s and video cards powerful enough to be used by Pixar Animation Studios!

At this point you may be wondering what it was like to drive these things?

Perry had an absolute blast. He has been using iRacing at his home since it first went on sale, so he was already very familiar with the basic physics engine along with a good number of the tracks. He took to it like a duck to water; for once, it truly was fun to watch someone play video games.

As for me? Not so much. Don’t get me wrong, what I did experience I loved! I had loads of fun manhandling an Australian V8 Supercar around Mt. Panorama. It was so realistic, I was on the alert for kangaroos. It’s just that I’ve used iRacing maybe three times in my life, so I was pretty much a novice. As an aside: track rendering in iRacing was done with laser measurements and is way more realistic than my point of reference: Forza Motorsport 4 on an XBox 360. For example, I consider myself pretty good at Road Atlanta, but in iRacing, I found myself overwhelmed at the steepness of the hills, perhaps 40% of the track was familiar. Thankfully, Lime Rock is just as I remember it in real life though, so we spent a good deal of time at that track.

There are three computer screens in front of you, allowing full­range peripheral vision. This is meant to immerse the driver further in the game, adding to the realism. Unfortunately for me, the aforementioned nachos and beef au jus sandwich conspired with these screens to make me more nauseous than a pregnant woman in her first trimester. Hence, I could only do about five minutes of driving at a time before I’d need to stop, get up, and rest my head in my hands without looking at any screens… It’s safe to say these simulators are realistic! Naid assured me that what I experienced happens to lots of people, but I think he was simply trying to make me feel better. I especially know both he and Perry were thankful I didn’t puke.

Perry on the other hand, was showing no signs of wanting to leave, even after almost four hours there. I was worried I’d have to take the keys and be a designated driver. My parenting skills kicked in and I told him we’d come back another day. He was a good listener.

For unparalleled driving realism, contact Naid Naydenov at Crimson Simulation today to schedule time on his masterpieces and be prepared to experience racing on a level you never thought possible! He can be reached on the web at www.crimsonsimulation.com or by phone at (917) 270­8313. Crimson Simulation is located at 25 Van Zant Street, Suite 15­6 in Norwalk, CT, only about an hour from NYC, and definitely worth the trip!