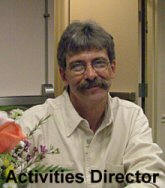 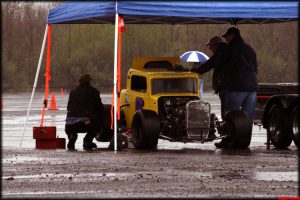 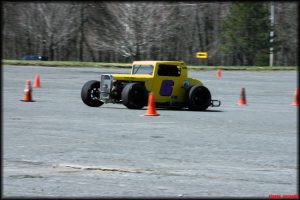 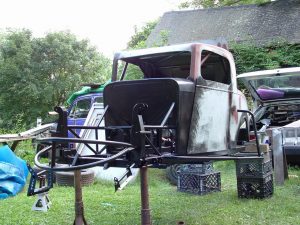 Rick Alexander was nominated for this by some good friends, and No I will not tell… I’m currently the Activities Director of CART (Connecticut Autocross and Rally team)( http://www.cartct.com ). In this position I haven’t been able to focus fully on developing my driving skills. So instead I’ve been working on my fabricating skills. Last winter I built my current ride from a bare chassis and body into a runner. It now has 7 runs accomplished and the prototype bugs are going away slowly but surely. Once this car is completely sorted out (I know they are never perfect), the next car will be a 2 liter mid engine A Mod with an aero package. At least I hope that will be the next project. Who knows what might come my way in the mean time. I’ve attached seven pictures of the car. The three “under way” are of the maiden voyage. The two rain day shots were from a test and tune where there were so many problems that I only got one run in and it was the last of the day. The ones where the car is in primer are basically what I started with last September. Now please excuse me while I hunt down the depraved individual who nominated me for this. LOL.
Quoted by a nominee “Rick has served as our Competition Director for 2 years. Rick manages the winter kart events, participates and helps to run our wintercross, track and autocross events. Rick is the first one to grab a wrench when a competitor has a problem. Rick helps maintain our website, and is responsible for posting results and tracking year end points in all classes and events. Rick has shown at several events without a car, due to “need to get it done’s” and worked the entire event.

What kind of car or cars do you currently play with, what class are

they in, and what are its particular strong suits in your opinion, if

fabrication of the cars and parts as evidenced by last winters project.

After each run and during my ride home, I’m way too busy during the

Do you see yourself looking ahead enough during a run; do you talk

out loud in your car during the run?

Occasionally I’ll find myself short sighted. And I only speak to myself

when I’ve obviously screwed up.

It’s the pay off rush that we do this for. Can’t happen too often

I want to try it but financially it isn’t in the cards right now. Some

day I’ll have two cars so that one can be considered disposable.

Walk without talking to others. Then watch the others run the course

Have you ever tried to get a company to sponsor you? Were you

Nothing of any consequence.

To be our club A Mod champ.

Solo? How did you finish?

What was your favorite subject in school ?

Wait a minute… That was the 60s wasn’t it? “If you can remember the

60s, you weren’t there” I guess I must have been there.

No, my record was clean for 15 years. See they just weren’t watching at

Besides racing, what do you do when you have time alone?

Time alone? I’m a sole proprietor with a family, there is never enough

music/band- All but country

car– Either the current one or the one I’m building.