Driver of the Month March 2008 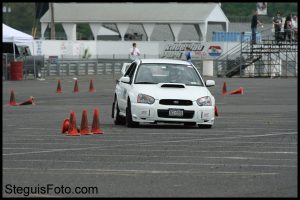 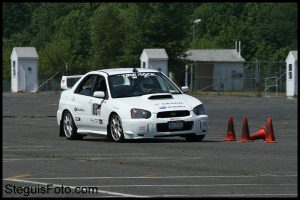 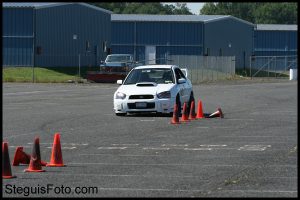 How’d you get started in Autox?  My friend in college had a Rome Divisional T-shirt on and I asked him about it.  I was hooked from there!

Hopefully, I’ll be as good as Perry by then.  Actually, I’d love to enter a Rally within 5 yrs.   Bombing through the woods sideways at full throttle is my dream!

Funniest autox story?   Trying to figure out what to do with the crusty tuna sandwich that was cooking in the sun (on the dash of the Philly timing truck) at Warminster.  The mayo was brown.  Unfortunately, the Philly guys didn’t offer me enough money to hide it in a certain competitor’s car.

Scariest moment?  Watching Hugo and Jan trying to drive my STi.  They never fail to spin it dramatically.

Worst advice you ever received?   I can’t remember ever getting bad advice!  Maybe my crappy advice filter is good.

Best advice?   Drive a tight line.   It really works.What you wished someone had told you when you started?

I wish someone told me to start autoxing in a non-modified car!

There are a lot of reasons.  There is always great competition.  I’ve made many of my good friends through autoX.  I also really enjoy setting up cars to perform well.  Not only with mine, but helping others with their setup as well.

D, all of the above.  Besides critiquing myself, codriving with talented drivers has helped me improve the most.

The s*** eating grin on my face tells all.

I try to walk at least 3 times.  Looking ahead while driving is key.  And instructing. Ha!  Travis gets mad when I do that (but I’m really helping out the newbies, honest!)

Codriving with Perry and GJ was key to improving my driving technique this season.   Using both in-car video combined with datalogging (with maxQ), we could really see both my strong and weakpoints with the data overlays.   I could also analyze the pros and cons of different lines.  As far as car setup, I tried various hardware configurations and settings before finally getting it right.  I made educated decisions as to what to change based on what the car was doing and would test each change independently.  It took most of the season but I’m glad I’ve invested the time.  The car has amazing front end grip, is well balanced, and is a pleasure to drive.

I strictly left foot brake unless I’m heel-toe downshifting from 3rd gear to 2nd (which you have to do a lot in the STi).  It does get a little hectic when you throw shifting into the picture but you get used to it.  With LFB, you save time between the throttle and brake transitions.  You can also use the brake to affect the rotation of the car.   When rallyXing in the impreza RS, we keep the throttle pinned in sweepers and modulate brake pressure to rotate!

Don’t be afraid to ask for instruction!   Instructors usually don’t know to approach you.  Also take advantage of the Evolution and novice schools out there.   Your learning curve will be exponential.

I do attend HPDE’s when I have the time.   It gets expensive in the STi so I’ve been driving a race-prepared civic (roll cage, harnesses, etc.) which is safer and much easier on the wallet.   I’m not rich enough for wheel to wheel.  Actually I’m not rich at all!

Have you ever tried to get a company to sponsor you? Were you successful?

I do get hookups from my dealer- North Coast Subaru in Glen Cove, NY.  They rock!  They are very involved in rally, competing and building cars.

Is it only the driving aspect that entices you to go autocrossing?

It’s the 3 hr drive home in bumper-to-bumper traffic from Etown that really keeps me coming back.

Too many 2nd and 3rd places at the big events.  It’s too hard to win with Corey Ridgick in your class!  He is the man.   I’ve never lost to him at Etown though!

To beat Winchester while codriving his Evo.   That will be tough!  I’ll be happy if I beat him at all.  We’ll try to make Topeka this year.

Something lightweight, RWD, with instant torque.  Maybe an ASP Lotus Exige S with lots of power… or that tri-rotor viking that shows up once in a while because it sounds vicious and lights them up at any rpm!

What was your favorite subject in school?  Calculus.  What do you expect, I’m Asian!

No, my parent’s minivan was too slow!  I nearly lost my license in college when I had my 1st Honda Civic.  Besides being slammed with a huge exhaust, it had clear taillights!  They were cool to have back then!  I miss that car.

Food-  anything at Nobu

Other hobbies besides AutoX:

Some of your favorite Web Sites? besides AutoX4u of course..

My favorite site is holunfie.blogspot.com of course!  We have some interesting content brewing for 2008 with Jay and I codriving his Evo- video, data overlays, car setup.  John is an amazing driver and the car is receiving some nice upgrades over the winter.  Look out BSP!  Adil and I have rally plans as well. More rallyX’s, TSD’s in the woods… maybe I’ll enter the notorious Vermont Winter Rally and document our experience.  We know how to have fun!

Our friends at axisofoversteer.blogspot.com have great content as well.  Check out their videos!  Awesome.

Driver of the Month March 2008