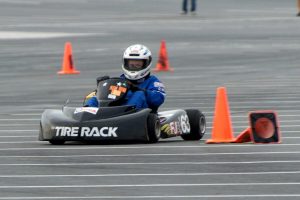 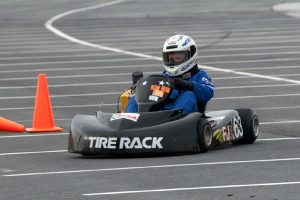 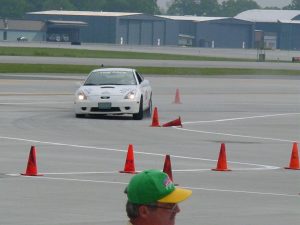 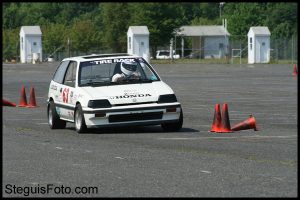 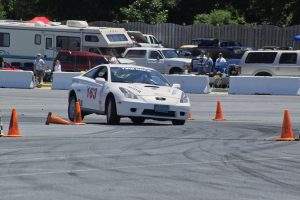 How’d you get started in Autox?
Rob – I had a racing bug while I was in college, and having no money, autocross was a low-expense outlet for motorsports.  My original intent was to get into wheel-to-wheel once I graduated, but by that time I was headed towards autocross as a means-to-end.

Robby – My dad has always done it, and I’ve always wanted to race too.

What you wished someone had told you when you
started?Rob – Autocross is not something that you are naturally fast at immediately.  I honestly think getting up to speed on a track is easier.

Robby – It’s not as easy as it looks.

What year did you first get interested in (or start) autocrossing, and what did you drive?
Rob – 1985, in a 1980 Chevy Citation.  Iron duke and four on the floor.  Bench seat too.

What kind of car & class do you currently compete in?
Rob – A 1986 Honda Civic in E Prepared.  I’ve owned this car since 1992, and originally ran it in DS until turning it into a prepared car in 1995.  It was my regular ride through ’99, until I bought a 2000 Celica for ES which turned into GS. The LSD Cooper S put that car to pasture, so I bounced around renting rides, for ’05 Brain Conner’s Elise, and in ’06 Jeff Jacob’s Mini.  The Civic got taken out of mothballs mid-’06 and I was transitioned back into it by the middle of this past year.

What made you choose your current autox car?Rob – The cheapest race car is the one you already own.

Rob – I hang around with the Evolution Performance Driving School crowd, names like Johnson, Salerno, Strano, etc.  That said, since I drive something a little different than their typical rides, I listen and then adjust to how I know my car will react.

Funniest autox story?
Rob – There was an encyclopedia’s worth back in the early 90’s when I ran with Derek Francis as a team in the red ’86 Civic in DS.  We were part of a bunch that included Dean and Neal Sapp, Jeff Altenburg, Brad Klein, among others.  The high mark (or low, depending on your point of view), was Dean Sapp streaking across the mezzanine, wearing nothing but a full-face helmet, going behind the backdrop then coming back out, right as his trophy position was being called at the 1992 or 3 Pro Solo banquet.  The helmet was my idea.

Rob – Bicycling the Civic in EP trim at Topeka in 1998.  Too many to count on the way to and from events.

Robby – At Romulus Divisionals in 2006, almost going off the wet runway straight into the 4’ high grass at 55mph.

Rob – Probably with what I’m driving now, with several planned improvements.  I would like a fast-ish Stock category car, but with two sets of college tuition bills coming up at that point, I figure that is going to have to wait.

Robby – Something with more than 8hp.

Rob – I knew it before, but slow really can be faster.  I focused on technique for low-grip asphalt, and that really paid off at Topeka this year.  I did not touch set-up at all this year, but from what I learned I will be trying some different spring rates based on how the car was behaving by year-end.

Robby – I need dad to buy me new tires more often, like more than once every three years….
Do you left-foot brake? In your opinion how has this helped you?

Rob – Yes I do, and at first when I taught myself this, way back in ’86, it was a big help.  Then it became a big hurt, because it is too easy to keep your foot planted on the brake to keep the car all safe and secure feeling.  The key is to have it there, but to use the brakes sparingly.

Robby – In a kart you have to left foot brake.

Rob – Walk the course as many times as it takes to remember it, and go to as many events as you can get to.

Robby – Learn your ride before you push it.

Rob – Several offerings back when I was starting out on car selection.  Honorable mention goes to Nigel the Yokohama Motorsports Manager back when I was a contract driver for them, telling me to run the crap they gave me off the truck at Nationals.

Robby – Someone told me just have fun and that winning doesn’t matter.  Yeah right…..

Robby – My Dad told me it would be slippery on Sunday morning at the Peru Pro Solo when I was leading, and I didn’t listen and lost.

How much of the sport do you think is attributed to driver skill vs. car setup?
Rob – 75% to 80% driver; the rest set-up

Robby – You could have a great car and a terrible driver and still lose big. Although set-up is important you have to have driver skill to win.

Rob – The people and social aspect of it.  The time commitment works with my schedule of late too.

Robby – Driving is my favorite thing to do and going out to eat every night and hanging out is a blast.

How do you critique yourself, during your runs, after each run, or after the event?
Rob – I think about it while driving, concentrating on points I’ve established from my course walks.  After a run, I will typically only recall the really good or really bad elements.

Robby – I always remember the difficult parts of the course from my course walks and try to concentrate on all my braking and turning points.  After a run I think about the mistakes I made and I try to correct them.

Rob – Nothing special, just as many walks as it takes.

Robby – I try and pay attention to the course, blocking out all of the talking and just focusing on the major points.

Rob – Someday, but not now.  I have done the Time Trial thing way back, and it was actually kind of boring compared to autocross.

Robby – I might consider it if my Mom would let me.

Rob – Lots, including too many Tours and Pro Solo events to mention, or even remember.  But never a jacket.  Two times first loser at the Solo Nationals, in HS in 1989 and in EP last year.

Robby – I’ve finished first or second at most every event I’ve run, including a few where I’ve been more than 20 seconds ahead.

What is your primary goal for the upcoming 2008 season?Rob – A fitting for something in size XL next September in Topeka.

Robby – XP C6 Z06, because even though I’m not old enough to drive it, it’s imaginable, but I’d settle for a new chassis with a World Formula engine

Rob – None of the choices.  Nobody was more happy when they got handed their college degree, in engineering at that.

Robby – Academic subject:  math; but my favorite is gym because it is the easiest.

Robby – Not for ten more years.

TV Show-
Rob – British Touring Cars, when and where I can find them.

Robby – Any ALMS racing and the Simpsons
Movie-

Dream Car- (Robby)Attainable= BMW 330,  Dream time= C6 Z06
Other hobbies besides AutoX?
Rob – Home improvement, not much time for any more.  I used to be a semi-serious mountain biker way back.