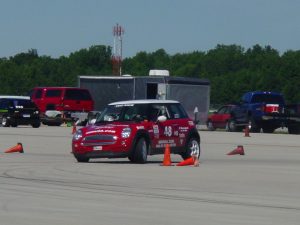 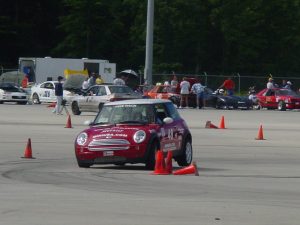 What year did you first get interested in (or start) autocrossing? 1991

I compete in my MINI Cooper S in G-Stock and in Mark Chiles’ MINI Cooper in H-Stock. Chiles and I are switching off classes at ProSolos and National Tours this year. These cars love transitional stuff like slaloms. Both cars are excellent choices for their classes, but other people have shown you can still win with other makes. The regular Cooper is just plain fun and easy to drive competitively in H-Stock right out of the box. When you are wondering if you can do that maneuver flat out, try it, the car will usually do it and amaze you. In G-Stock, the supercharged Cooper S is more of a challenge to drive fast due to the wheel spin, but we’ve worked hard to set up the car to get the power down while still keeping that great Cooper handling in the transitional stuff. It’s really working well now.

I would say 90% driver skill, 10% car setup for most cars and classes. That’s not to say that the 10% does not matter. That 10% separates the top drivers at a National level. The one driver with the best setup for that day’s course on that surface in those conditions will have the tenths, hundredths or thousandths to take home the big trophy. But even if you have the national champion’s car — if the driver skill isn’t there, you’re not going to get the top result. This is why I have in the past and still today co-drive with some of the top drivers and car preparers in the country like Chiles, Mark Allen, and Danny Shields. I agree totally with Chiles’ advice in the May 2004 issue of Sportscar — spend your money on an Evolution school first, then go get yourself some sticky tires, an autocross alignment, and shocks (in that order).

Yes, I think you have to be aware — even as you are on course — of what you are doing right and wrong so you have a shot at fixing it that next run. If you get to the end of an event and only then start really concentrating on what you could be doing better, you’ve probably wasted the day and could have learned as much driving up and down I-95.

I know when I am not trying hard enough and pushing myself enough when I’m not shaking after the run. If I get to impound after finishing my runs at a ProSolo or Tour and my hands are steady, I know I left time out there and I’m usually not winning. Even the top level drivers I’ve co-driven with shake after a particularly good run, and it’s usually after they needed a hot time to take the lead.

I’d like to at some point, but it’s just not in the budget right now. You talk to people who have been autocrossers, then roadracers, and have returned to autocrossing, and you get a lot of the same feedback, the track time in roadracing is great, but roadracing just requires substantially more money if you want to be competitive.

Have you ever tried to get a company to sponsor you? Were you successful?

I’ve co-driven with people who have both the industry contacts and the racing resumes to obtain sponsorships, and it isn’t always easy even for them. Keep in mind that sponsorship isn’t always just in the form of money but could be discounts on service or other support. I’ve also had the good fortune to run cars that have good contingency programs available, but of course then you have to win to get the money whether you run the decals or not. But I think even a local autocrosser should take a shot at seeking support from a company if they have the relationship, you just need to present a professional image that compliments the sponsor and be able to explain a benefit to them. That, and keep your expectations as to amount or terms reasonable.

Is it only the driving aspect that entices you to go autocrossing?

No. Competing at these ProSolos and National Tours all over the country like I have the last few years wouldn’t have been nearly as fun if it were not for my co-drivers and other friends I count on seeing at the events. Planning where we are all going for dinner on Friday and Saturday nights is almost as important as the planning we do for the event itself. And it is particularly fun when people I know from my home Philly Region show up at the events and I get to cheer them on as well.

I’ve won state championships in Florida and last year in PA. I’ve won one or two Southeast Division championships and a Northeast Division championship. Due to competing in so many national level events the last few years, I haven’t run enough local series events to get a year end award recently. My main focus the last four years has been winning trophies at national events. I got my first ProSolo win last year at Oscoda in G-Stock driving the Cooper S. Then this year I got my first National Tour win, and have added a couple more ProSolo wins. At Nationals, I’ve trophied a couple times. Interestingly, both times in H-Stock, one year co-driving Danny Shields’ MX-6 and last year in the Cooper. My goal last year was a top 5 finish in H-Stock and I only missed it by one spot.

What is your primary goal for the 2004 season?

You start off every year thinking that maybe this is the year you can raise your game to National Championship level, and I’m working hard to do that, getting as much seat time a possible. But you have to set reasonable goals that give you steps to get there, so I set a series of goals. Goal #1 was to win at least one National Tour. Goal #2 was to win enough ProSolos in H-Stock and/or G-Stock to go into the Finale with the maximum points and to have a shot at a ProSolo Championship. Goal #3 is a top 3 finish at Nationals this year. Those would be personal goals — for the team our goal was to finish developing the Cooper S into a competitive G-Stock car and to give each of us a chance to win ProSolo championships in either car (and of course win as many tires and as much contingency money as possible along the way). So far, so good.

ANY ride imaginable — the Ferrari 360 that was being run in ASP a couple years ago at national events looked like great fun. But realistically, I think it would depend on what class seemed to be the most competitive that year. Right now I think you’d have to say Super Stock has many of the top drivers in it, so having to push yourself to keep up with those guys in a Z-06 would be a lot of fun.