Driver of the Month December 2004 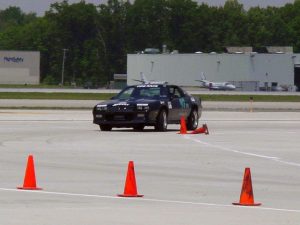 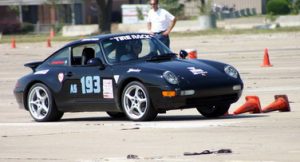 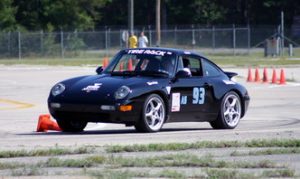 What kind of car did you compete with in 2004, what class , and what are its particular strong suits in your opinion?

What do you think about the new changes for ’05 in AS?

Paul–  The S2000’s owned us in 2004, so the class just got incredibly tougher.  The poor non-S Boxters got bagged.
Lynne–  Good for SCCA, good for sustaining A Stock, more competition for me.

Paul–  Probably the 993, although I think we’ll be fighting an uphill battle.  Love driving the car.
Lynne–  Likely the 993 for at least some events.  It’s a blast to drive!

Paul–  Probably Hoosier, although I’d like to see them step it up a notch to compete with the 710.  Great rain tire though.
Lynne–  Undecided.  The 993 needs a tire with more feel.  The edge on the latest Hoosier feels numb.

When will the infamous Iroc come out of retirement?

Paul–  It’s ready and waiting..
Lynne–  It’s been out of retirement twice before.  You never know..

Paul–  Definitely driver skill.  I tend to get our cars set up within a certain comfort level of performance, and then focus on driving fast.
Lynne–  Mostly driver skill.  I focus very little on the setup of the car.  I focus most on learning how to optimize their potential.

Paul–  I try to learn from each run to make the next one faster.

Lynne-  Yes, absolutely.  I am very analytical about my performance.  That’s how I learn.

Do you see yourself looking ahead enough during a run; do you talk out loud in your car during the run?

Paul–  I do not look ahead, (“I look at my feet”, quoted from Paul as we spoke last year) which is a bad habit I need to break (especially as I grow older).  I normally do not talk.  If I do, it’s at the very beginning of the run for self-encouragement, or a few short words if I make a bad mistake.
Lynne–  I look ahead, maybe sometimes not enough.  In the car I don’t talk out loud, but I do utter expletives if I make a big mistake…

Paul–  Typically I’m shaking from the adrenaline rush and the feeling that you got away with murder.  Then I focus on going even faster.
Lynne–  Great, then I want to go faster.  Nothing feels better in autocrossing than finding the zone of unconscious driving.

Paul–  I’ve done two driving schools and raced SCCA regional showroom stock for a year and frankly it’s rather boring.  There’s little actual “wheel-to-wheel” racing, and circulating around a track is easy once you’ve done it enough.  I think Danny Shields summarized it wonderfully in his column titled “Loving Solo and Dreading Hurricanes” in the latest December 2004 SportsCar.
Lynne–  It’s a seductive idea but I don’t believe autocrossing necessarily is a stepping stone to other racing venues.  It is one of the most challenging forms of motorsports that happens to be low risk and low cost.

Paul–  Usually I pick up a course design fairly quickly from a few walkthroughs.  My first impressions seem to stick better.  If I walk a course too much (i.e. Nationals) I tend to forget or second guess it more.
Lynne–  Waking the course, visualization, talking about it, and creating an overall flow in my mind.

5 SCCA ProSolo National Championships – all in the IROC

Paul–  Kick everyone’s ass (including my wife’s).  Seriously, to enjoy the journey.
Lynne–  Drive the best I can and have fun doing it.  Of course, if while I do that I walk away with an Open Class Solo II National Championship, then all the better.

Paul–  I would think the fastest AMod available.  I can’t imagine a bigger thrill.
Lynne–  I have never really thought about it.  I’d imagine a Porsche GT3 would be a blast.

What do you both enjoy doing when not racing?

Paul–  Riding motorcycles and spending time at the shore.
Lynne–  Spending time in natural environments, especially near the shore or in the mountains.  Playing and cuddling with our two cats.

Paul–  The African Queen
Lynne–  Dancing With Wolves and The Matrix

Driver of the Month December 2004