Driver of the Month August 2008 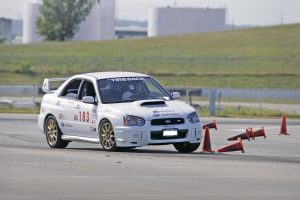 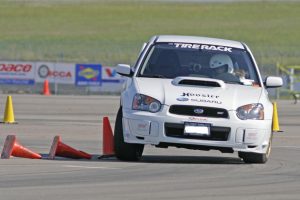 CHRIS:  Not in any rush.
DIANA: No kids yet.

CHRIS:  I saw an event while living in San Diego but didn’t get started until I moved to NY.

DIANA:  I watched Chris on the sidelines for at least a season.  I finally got the opportunity to ride as passenger for a fun run & I was hooked!

CHRIS: That I was competing illegally in STX with my Turbo charged 2.5 RS Subaru.

DIANA:  How mental the sport is.

What year did you first get interested in (or start) autocrossing, and what did you drive?

CHRIS: I currently field an STI in A Stock.

DIANA:  Subaru STI in A Stock

Will you be running your new STi this season?

CHRIS:  I have been trying to campaign the STI to show what it can do. I’ve had some unexpected complications but I think it can be a front runner.

DIANA:  Don’t you mean will the new STI be running this season?  I hope so.

CHRIS: I was on the fence this year choosing between the S2000 CR & the STI.  I checked out the specs of both cars.  Considering the new hardware, I thought I would be better suited with the STI.

DIANA:  Countless hours of debating!  I’d really like to see if an STI can take the win in A Stock.  Any STI in A Stock…no rainy conditions.

CHRIS: Without a doubt it is my wife.  We support each other so much when it comes to the sport and

we push each other to become better drivers.

DIANA:  Chris, of course, is a big influence.  How awesome is it to have your best friend & husband as your co-driver? But many others also…anyone that is insanely fast, has a good attitude & pushes me to driver faster.

CHRIS: This would have to be the first time I was an instructor at a FCSCC rookie school.  Believe it or not I get motion sickness when I do a ride along.  It was only about 2 hours into the school and we were doing increasing radius and decreasing radius turn exercises.  At this point I had already been on 20 plus instructor runs and I started to feel a little queasy. I was about to hop into a drivers car (who will remain nameless) that lets say is not the smoothest around.  He starts the exercise and about half way through I puke in my mouth.  The rest of the way through his run I’m trying to swallow it back while still attempting to provide instruction and luckily I never let loose in his car.

DIANA:  Once a fellow autocrosser came up to Chris at an autox & started asking him how he liked the new STI.  The guy said he had driven the new one & thought it didn’t feel as responsive as the older one, etc. (he brought up some really specific items).  So I can see Chris getting all intrigued to talk to someone else that had experience with the new car.  So Chris started asking him questions back.  Then Chris started asking him more questions about where he test drove it.  At that point we realized that the guy had never physically driven the car he was just recounting his experiences from Gran Turismo, the video game!  Neither of us reacted but I thought it was hilarious!

CHRIS: That would have to be at an NYR event when a Mustang Cobra decided to make his own way through the course and I almost became a down cone.

DIANA:  Nothing comes to mind.

CHRIS: Hopefully with a National Championship.    Driving a Lotus Exige.

DIANA:  Having a blast whatever I may be driving! It’d be nice to drive something with an insane amount of grip for a change.

CHRIS: That driving the tight line is usually the fastest and when setting up a car I try not to sacrifice overall grip for rotation.

DIANA: That you have to drive outside of your comfort zone to improve.

CHRIS: I do and I think with a relatively heavy stock car it really helps with weight transfer.

DIANA:  Yes.   I think it helps me brake more aggressively.
What can you tell a Novice who is just starting out?

CHRIS: Don’t go out and buy parts for your car just because you think they will make you faster usually the nut behind the wheel needs the most attention when you’re just starting.

DIANA:  Seat time, any seat time, is invaluable.  Run whatever you have that can pass tech.

CHRIS:  Someone told me to buy r-comps before I really knew what I was doing out there.

DIANA:  Getting no advice is the worst advice.  Good & bad advice can help you learn what is best for you.

CHRIS: I think this would have to be my first EVO School when Jr. Johnson and Mark Daddio told me to look ahead, look ahead, oh and look ahead.

DIANA:  Only focus on what you can control.

CHRIS: I would have to say 90% skill 10% car since I mostly drive stock class cars.

CHRIS: Besides the friends that I have made and the people that I have met it’s got to be the challenge of competing at the highest level.

DIANA:  The awesome people we have & will meet!  The adrenaline rush, the competition & the continual quest for the perfect run (to get 10/10ths out of the course, car & driver).

How do you critique yourself? During your runs, after each run, or after the event on your drive home cursing at yourself?

CHRIS: I try not to be to critical of myself for the most part I like to think that I did the most I could do on that particular day.  I can’t say I’ve never got on myself for hitting a cone or getting off line but I always look forward to the next competition especially if I got smoked.

DIANA:  For me it’s most effective after a run or run group.  If I am critiquing myself during a run, I know I’m not completely focused so it won’t be my fastest regardless.    And it gets real old real quick discussing regrets on the long drive home.  So I try to stick with what’s most constructive.

DIANA:  I try to visualize as much as possible while walking the course (where I’ll be looking, what the car will be doing, etc.)

CHRIS: I would love to get into both but I just can’t seem to find enough time.

DIANA:  Of course, that’d be awesome!  Just not crazy about the chunk of change that’s required.

CHRIS: I’ve got a couple National Tour Wins, and enough 2nd and 3rd Pro Tour Trophies.  I think my 2nd at the Pro Finale last year has got to be my proudest so far.  Talk about competition I lost by .027 and was only 2nd by .031 that was a fun day.  One thing I never got a trophy for but will never forget was when I took down the man Mark Daddio in the Pro Finale Challenge.

What local club do you most enjoy running with? Why?

CHRIS: I can’t narrow it down to just one club. I like to run with everyone because the people make the events for me but there are some lots that I tend to stay away from because of poor surface.

DIANA:  Not picky as long as the lot doesn’t cord tires & the course is not insanely tight.  NNJR, NER, FCSCC, Motorsports NE, PSCC.

What is your primary goal for the upcoming 2008 season?

CHRIS: To be a threat at Nationals with the New STI.

DIANA:  Continue to improve.  Win a National Championship in a Ladies Class.

CHRIS: A Lotus Exige because that car is way cool and it would fit like a glove.

DIANA: Honestly with Nationals around the corner…my own car back!  Is it getting pathetic yet?
What was your favorite subject in school?

CHRIS: No tickets really I drive pretty slow on the street Grandma Style.

DIANA:  Nope.  I was good at not getting caught.

CHRIS: MILK does a body good.

CHRIS:  Cold Beer with my Steak.

CHRIS: Smallville cause everyone wants to be superman.

DIANA:  Not sure.  Don’t really have the attention span to watch a lot of movies.

DIANA:  Any competitive fully prepped car would do it for me (the more HP & grip the better).

CHRIS:  Snowboarding. (No snowboarding in Hawaii)

DIANA:  Not too much time for anything else…snowboarding & skiing in the winter.

Time to buy new tires for the season? Remember to support the AutoX4u website when ordering tires from the TireRack. You can do this by clicking on the banner on my website autox4u.com. Your continued support is much appreciated! ... See MoreSee Less

Only Snell SA/M 2015 and 2020 rated helmets are allowed at this event. Anyone who will be on site for this even...
View on Facebook
· Share

As a participant in the ProSolo program in the past few years, we have a few important updates that we want to share with you.Registration for the New Jersey ProSolo—originally scheduled to open for SuperPass holders this afternoon—is being paused in advance of a ProSolo Town Hall now scheduled for tomorrow night.The Town Hall—scheduled for Thursday, March 24 at 9:00/8:00pm EDT/CDT—is being called to discuss the status of the Tire Rack SCCA ProSolo season. Heyward Wagner, Senior Director of Solo, and Mike Cobb, President & CEO, will address the challenges from this past weekend in Charlotte and share the initial steps and options for moving the program forward.Register for the Town Hall Meeting -->https://scca.zoom.us/webinar/register/WN_XiZ3_uIqSP25edi68dxCKg ... See MoreSee Less

Welcome! You are invited to join a webinar: ProSolo Town Hall. After registering, you will receive a confirmation email about joining the webinar.

This Town Hall is being called to discuss the status of the Tire Rack SCCA ProSolo season. Heyward Wagner, Senior Director of Solo, and Mike Cobb, President & CEO, will address the challenges from thi...
View on Facebook
· Share

Do you thank the Solo Safety Steward when you are at an autox event. You should, if there isn't a licensed SSS the event can not be run. Many clubs are usually in need of SSS. Solo Safety Steward and JDP Webinar Training Schedulewww.scca.com/pages/solo-safety-steward-and-jdp-webinartraining-schedule?fbclid=IwAR1MVsnuz1kCyrNm... ... See MoreSee Less

Objects in mirror are smaller than they appear. #s

Driver of the Month August 2008