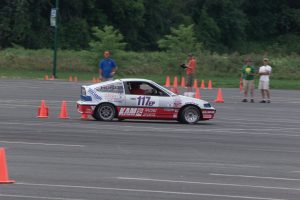 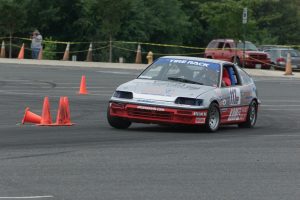 Attended my first event as a spectator in 1987.  It was a Blue Mt. Region event at Kutztown University.  I chickened out and didn’t participate.  It took me until 2000 to go out and try it.  After much research on the internet, I found a Susquehanna Region event at the Farm Show Complex. Sensing my hesitation after viewing the event for over four hours, Pam Moon made me an offer I couldn’t refuse.  She’d pay my entry fee and, if I wasn’t hooked, she’d refund my money.  Needless to say, I ran every event in the Susquehanna Region that season.

1990 Honda CRX dx.  The car has continually evolved after purchasing it in 2001 from ES to HS (due class restructuring).  At the end of 2003 I began it’s conversion to E Prepared, where it now resides.  Light weight, and it’s potential horsepower to weight ratio.  I also guest drive the Chiles/Jacobs/Ashburn HS Mini Cooper on occasion.

90/10 skill vs. setup.  I know personally I’m making up for lack of car preparation as I’ve transitioned to EP.  My car is still very under prepared and quite heavy compared to the competition, yet I’ve been consistently in the hunt.  If it was purely a car prep issue, there would be no need for schools like the Evolution Performance Driving School.  Without the help of my instructors, Mike Johnson, Pat Salerno, Tommy Pullium and Bruce Bellom, I’d be a lot further from reaching my potential.  Having other Evolution Instructors to use as a sounding board for car set-up, like Sam Strano, hasn’t hurt though either

The competition.  It’s pretty much in my blood.  I grew up having a father and mother who both drag raced in the 60’s & 70’s.  In addition I grew up racing BMX bikes through the Mid-Atlantic region, then got into USCF cycling.  Also, it’s definitely the new friends I’ve made along the way and the travel involved with National level competition (getting to go to such places as Rome and Peru.)

Absolutely.  Without critique, what would be the point?  I’ve even had corner workers tell me they’ve heard me talking to myself during a run.

Out of breath, with major arm pump.  A pure adrenaline rush!

Maybe.  I also do Solo 1 hillclimbing with the CRX so that typically satisfies my need to go even faster and experience more danger, although the appeal of putting my skills to the test against 20+ other people at the same time is there.

Yes.  Yes.  I’ve become somewhat known for all the Sponsor logos on my car.  With two small children, my disposable income was at a premium, so I decided to pursue sponsorship.  I’ve been very fortunate to have a great primary sponsor in Denny’s Electric Service, and a secondary in MIKESTAT2.com.  My compliment  of associates with KAM Racing Sports, Todd Lengle & Co. and Mohnton Navy Yard Galley rounding out the lineup have all been great!  Without them, I wouldn’t be able to pursue this hobby at the level I am.  In looking to give the sponsors an even greater return, the CRX will be repainted for the ’05 season in primary sponsor, Denny’s Electric Service, colors.

No, it’s the people.

Still trying to attain that elusive 1st National event trophy.  I’ve been in the hard luck (1 out) spot more times than I care to count.

Re-learn to drive the new EP version of the CRX…fast.

Trophy at a National Tour.

Chevrolet Corvette Z06.  I’d like the challenge I’m sure it would present to someone who’s driven front wheel drive cars most of his life.