Homer (the poet, not the Simpson) was right all along… There is no substitute for the original. Odysseus’ wife, Penelope, knew this throughout The Odyssey. She resisted suitor after suitor until her true love reclaimed his home.

The same could be said for car enthusiasts worldwide. While printed and digital media alike features no shortage of automotive content – some of which is quite good – it just isn’t them.

Clarkson, Hammond, and May.

Their names roll off the tongue like old friends.

Their natural chemistry both on and off camera, allowed Top Gear to become a true global phenomenon in the proper sense of the word. It even prompted CBS’ 60 Minutes to create a segment about them back in 2011.

And so it goes with respect to the release of the 14th and final episode of The Grand Tour’s third season. Called “Funeral for a Ford”, it really should have been called “Funeral for a Format” because at the end of their story on the rise and demise of Ford’s midsize family car, Clarkson, Hammond, and May revealed that this was their last show. The end. Fin.

A format billions of people around the world have become accustomed to for 17 truly magnificent years – between both outlets – would be ending as we know it.

Many wept, and so did I.

One of social media’s many shortcomings is that it abounds with more spoilers than a Formula 1 paddock. So, even though I had heard of this announcement prior to watching it myself, it still wasn’t easy to accept. And while Clarkson, Hammond, and May announced that they’d be doing travel specials (exclusively) beginning next year, their studio component is what defined them. Admittedly, some segments were better than others. But at the end of the day, A-list celebrities wanted to be on their show. Professional racecar drivers wanted to get their names to the top of their leaderboard. Manufacturers wanted one of the trio to wax poetic over their product so as to create greater marketing buzz… Such is the sphere of influence Clarkson, Hammond, and May possess in the automotive world.

Consider that we’ve been taught since an early age that nothing lasts forever; the Earth, the Sun, and even the Universe has a lifespan… The same holds true with the things we love in the world.

However, we’ve been treated to something special thanks to their hard work and dedication. We should cherish the imaginative projects, the ground-breaking adventures, and the records shattered. We should celebrate and reflect positively upon what we’ve been privileged to watch with each new series all these years.

Indeed… Clarkson, Hammond, and May set a global standard countless others are still trying to match, but never will.

What makes this even more poignant is the realization that as the automotive industry moves towards electrification (cool!) and demands autonomy (not cool!), the true appeal of a chain-smoking Orangutan, an accident-prone hamster, and a slow-driving pedant – and all their respective idiosyncrasies – will become even more special in the years to come.

Therefore, let us bow our heads in remembrance, but let us look to the sky above for the promise of tomorrow as we await some epic road trips. 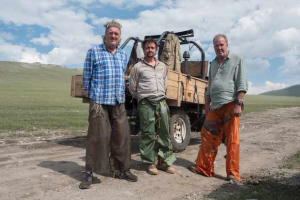