Anyone who knows my dad knows that he’d classify as a “beast” in today’s millennial vernacular. He was always just strong and he never needed to lift weights. Proof of this exists in the fact that when I was five (way back in 1979!), he dressed up like The Incredible Hulk for Halloween one year and proceeded to pick a car up on two wheels while visiting my cousin Craig at the gas station where he worked as a teenager. It was astounding! Alas, such feats of human strength eventually caught up to him as he aged… Actually, it caught up to him the next day.

I, on the other hand, inherited no such natural ability. Instead, I inherited my mom’s wrists. No matter what I did, I couldn’t develop them. To this day, I fear that if I were ever to attempt a cartwheel, my wrists would crumble as if they were made of graham crackers.

Now, over the years, I’ve been fortunate to have had the pleasure of driving dozens of different vehicles that ran the gamut from bone-stock FWD econoboxes to thrilling single seat racecars to breathtaking mid-engined exotics. Many of them lacked power steering because said vehicle simply didn’t weigh enough to warrant the presence of such a system. The additional weight or complexity was outweighed by the need for lightness and simplicity… And in 99.9% of these instances, I drove just fine, my wrists handling everything with aplomb until, that is, the day I drove an older Porsche 911 with a manual steering rack on R-Compound tires in BSP.

Of all the platforms I’ve been strapped into, my time piloting the venerable 911 is quite limited, and this is especially true of the older, air-cooled models. Naturally, this has meant that any time I’ve spent behind the wheel, I had to remain cognizant of all the “rules” that go along with it… Porschephiles will understand. That said, back in 2012, I had been give 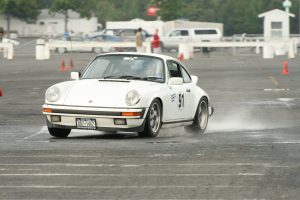 n the opportunity to drive Dylan Cather’s amazing 1984 Porsche 911 SC. For those of you who don’t know Dylan, he is a wonderful, kind-hearted individual who has always been into fitness. Back when the NNJR was hosting events at Raceway Park exclusively, he would tell us how he missed some events because he was teaching water aerobics to old ladies. This suited him because he was driving an NA Miata at the time. Dylan has since partnered with a successful bootcamp fitness center in Scarsdale, NY and is capable of running through the Sahara, swimming the Atlantic, AND teaching water aerobics to old ladies without breaking a sweat… I think millennials would call Dylan “savage”.

The co-drive was going very well. With each run, the tires and the brakes were coming up to temp and the car was beginning to reinforce why people go to great lengths to own one at some point in their lives… The immediacy of its reactions, the analog-ness of every component, the sheer sound of the experience was making me feel like Walter Röhrl. The finish that day was an off-camber right that opened up into a flying finish. Get it wrong, and the car pushed into oblivion as it “fell” off the cliff; indeed, MetLife Stadium isn’t as flat as it appears! Get it right, however, and you held the turn tight to the inside and tracked out, under full throttle, past the lights.

Being primarily a FWD guy at the time, I was accustomed to being able to trail-brake into corners and if the need arose, being able to quickly lift off the throttle in order to help initiate some rotation out back. Once the nose was pointed where I wanted, I’d mat the gas and the front would pull the car through. This technique worked great in my MINI at the time.

As I was approaching the final corner on one of my last runs, I realized I was going to be about 3 feet off line for my turn-in so I quickly lifted off the gas to get the rear to rotate… Did it ever! The combination of all that weight out back – rapidly becoming a Teutonic pendulum – coupled with the sheer grip of the front tires (remember, they were nice and sticky by now) snapped the car around with enough force that in my futile attempt to catch it, injured my left wrist.

I knew it wasn’t broken, but I felt a pop and it was instantly sore. I could move it, but it was tender and made funny sounds doing so, yet, the adrenaline was flowing. Thus, even if it was broken, I’d probably have continued on, I mean, you don’t tell someone who carries fire hydrants around the streets of NYC for fun that his Porsche hurt your sissy wrists! Luckily, it was a sprain, but to this day, I’ll be able to crack it in ways I can’t with my right wrist… It’ll be fun to see where this goes later in life.

One thing’s for certain though, as much of a purist and minimalist as I am, I will not shun the modern convenience introduced to the car-buying public with the 1951 Chrysler Imperial ever again.