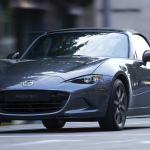 My disdain – okay, hatred – of cats is well documented. When the last of my wife’s cats had to be put down, I had all the old cat items out of the house within 48 hours, or was it 24 hours? Doesn’t matter because I was determined to erase any and all evidence we had cats in the first place. My kids have asked from time to time ever since; and as for my wife, she has tried to see if I’m open to changing my mind, but to no avail.

Now, my wife is a fantastically wonderful woman. She’s smart, sweet, loving, and caring. She is often my conscience when my “FTW” attitude surfaces and is about to make someone miserable. She deserves the best, and for the last 2.5 years, automotively speaking, we’ve both had leases on new 2018 Mazda 3 Sports that have proven to be reliable, efficient, carefree transportation. She chose the sedan, I got the hatchback. Relatively early on in her time with the car, she realized that a trunk was a rather limiting body style, understandable given that she had gotten out of a 2004 CR-V that could seemingly swallow half a Costco and still have room for the family. But, the vehicle started needing things. Plus, it was one of the last vehicles that didn’t have ABS or many other basic safety items that we now take for granted across the board.

What does this have to do with the title? Everything.

You see, my wife was raised in a family where cars were simply the apparatus that moved people from Point A to Point B. To her and her family, cars were used because we don’t use horses anymore and we don’t live in NYC and, thus, lack access to a stellar mass transit system. It’s not a knock against her or her family, they’re all wonderful people as well, it’s just that at the end of the day, would a non-car person really care about what they drive as long as it’s reliable and safe?

Now, perhaps it’s the 45+ days of shelter-in-place talking, but my wife has been looking for a dog for my mother-in-law to adopt and she came across a cat up for adoption. It’s name is Winslow.

She asked if we could get Winslow. I said, “If I can get a new Miata Club out of it, then sure.”

I told her that both lease payments ($400 combined) plus $50 a month would allow me to get the Miata and we’d be able to pick from this used car buying guide  a $3000 used car for her.

She said, “Give me a minute. I’m trying to work out the numbers.”

Holy shit! I might get a new 2020 Miata Club in exchange for a fucking cat? Fine by me!

Sadly, by virtue of not being car savvy, my wife doesn’t really know that $3000 won’t buy you much in this part of the country that hasn’t fallen into a river or had a murder occur in it. So, when I excitedly ran to her with a list of sensible used vehicles, she pissed on them like Winslow would probably do to the house precisely 24.3 seconds after being brought home anyway.

So, to help sweeten the deal, there is a modified “Finder’s Fee” involved. There are 10, no strings attached co-drives in my new Miata Club if you can procure a reliable, safe, clean used vehicle for $3000 or less.