What is the Kelly Cup 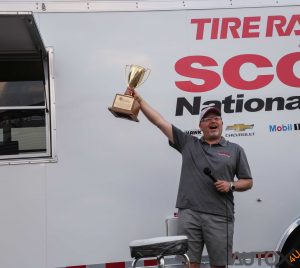 Years ago, before I became involved with the club, I remember talking with a fellow autocrosser, Wayne Faulkner. While Ernie was doing his drivers’ meeting speech, I said, “I would never want to get involved and do all that work. I’d rather just come and drive.” Well, you can all see where that went.

There was one event at Englishtown where I set a course, and one particular guy, André, who did not like it, so he left, went to the Farmshow complex in Harrisburg and ran in the PM session. I learned from that design; he never left an event again.

I have dedicated my time since 1995 to the NNJR Solo program. I helped it into the new era of T&S with computers.

I am so honored to receive this prestigious award. Thank you to all my fellow racers who nominated me for this. All the folks in the NNJR region you are my second family, the core staff that help me put on top notch events, and who also have the same passion for the sport. Thank you all very much. I am extremely grateful.